The final words of this amazing film stay with me. In the House of Commons, after the famous ‘We will fight them on the beaches’ speech and with the House cheering Churchill to the rafters, one man asks another ‘What has he just done?’. The reply, and last words of the film are ‘He has just mobilized the English Language and sent it into battle’. 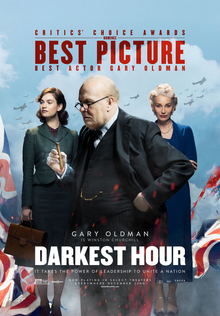 For lovers of the English Language like myself, Churchilll was – sorry still is – a magician. And he did just what the chap above said: as a historian I wonder just how many thousands of fighting men, planes and ships his words were worth. Hitler, with all his highly rehearsed speechmaking, was never in the same league but a pathetic strutting little moron.

I admit I had put off watching this film partly because I have just finished a book about the Second World War and I thought it might for me make heavy, though very worthy, viewing as some recent films of the great man have been excruciating. I actually caught up with it on a long-haul flight of 13 hours from Hong Kong to London when the entertainment options are somewhat limited (the other film I watched on the flight was ‘Paddington 2’ which, for totally different reasons, is also fab but it was a genuine case of going from the sublime to the ridiculous) and, once more to my amazement, I sat through the whole thing again immediately.

The reason is that it is not ‘heavy’ at all but very, very funny. Churchill’s jokes flow almost as readily as do the champagne and brandy he liked to have for breakfast. It is even a bit fluffy, especially in the scenes with his secretary – a marvellous idealistic Lily James and his wife (Kristin Scott Thomas, who steals a couple of scenes). He also has a strong story arc with the king (Aussie actor Ben Mendelsohn) who, as a reluctant and shy man who had no wish for the crown which was thrust upon his head owing to the abdication of his brother, begins by admitting that Churchill scares him. Then, in a moving scene, played as straight as you like, he visits Churchill late at night in the darkest of the darkest hours and tells him that anyone who can put the wind up Hitler is OK with him and maybe they can become close confidants. ‘Don’t I scare you anymore, your Majesty?’ asks the Prime Minister. ‘Well, maybe just a little’, says the king, ‘but I can cope with it’.

The script is sharp and keen, although I cannot comment on the music as the roar of the jet engines and the snores of my neighbour put paid to that, but I am sure it is very good – I have read so.

My favourite scene? It is not actually the final one during which apparently audiences have been known to stand and applaud, but one just before that when he jumps out of his chauffeur-driven car at traffic lights and takes the Tube. This is highly controversial as it is made up but, as a quick and powerful way of letting us know that Churchill listened to the people before deciding not to make peace with Hitler – and this really was touch and go and an excellent historical point which is not generally acknowledged – I think it is brilliant. He enters the tube carriage and everyone stands up in panic and offers him a seat. ‘What are you all staring at?’ he asks. ‘Have you never seen the Prime Minister travelling the underground before?’ He then chats to them all and finds out what they think about making peace with Germany. It is a bit cheesy when he asks a woman how old her baby is. She tells him and then says ‘he looks like you, sir’ and he replies’ Madam, all babies look like me’. Then, when they all say ‘Never’ to peace terms, he cries. I admit that at this, and other times, I was having trouble with my own eyes – it was due to the air in the aircraft, I am sure: it is very dry, you know.

Finally, though, plaudits go to Gary Oldman for his Oscar-winning performance. It is everything you have read about it. He IS Churchill. Most amazing to me is not the boisterousness nor the ‘stubborn bull’ attitude but the vulnerability of the man. He had the gravest doubts about his ability to lead the nation against odds that everyone said were impossible, but he did and changed the course of the world as well as the English language.

Please go see – I will be mightily surprised if you do not find it charming, funny, tragic and much else. In my own case, never in the field of human flights have so many minutes passed so quickly on an aircraft with so many sniffles and laughs. Excellent.