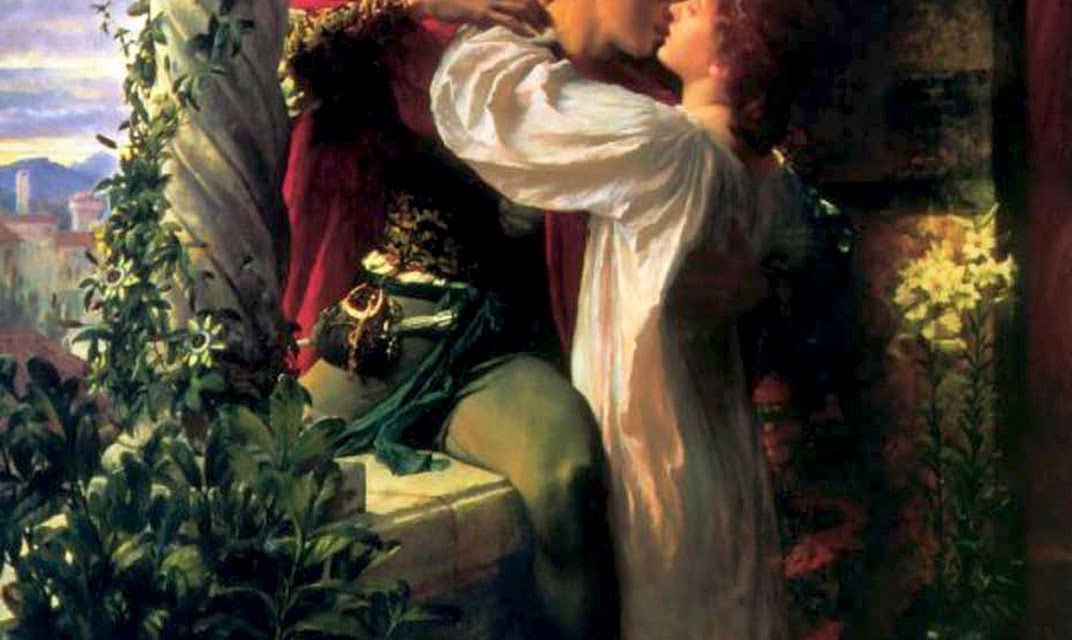 Who was St Valentine?

Saint Valentine’s Day, 14th February, is recognised as a special ‘lovers’ day’ in many countries although it has never been a public holiday anywhere. There are different St Valentine’s Days in different religions, for example, in Eastern Europe it can be 6th or 30th July. 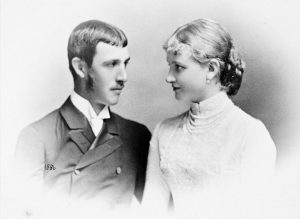 Above: Archduke Otto and Princess Maria of Austria, 1886

There are several contenders for the honour of being the original St Valentine, all of which are extremely suspect historically speaking, but who is really bothered with that? Myths have become interwoven and no-one knows the truth now. The most famous character in the story is probably St Valentinus of Rome who would apparently perform Christian marriage ceremonies for Roman couples at a time when the religion was illegal. He is said to have worn a purple amethyst ring with an image of cupid on it so that he could be recognised by those wanting to be married. For his pains he was imprisoned and executed but not before healing the daughter of his jailor. He wrote her a letter just before he died saying ‘Be my Valentine’. Well, yes….. 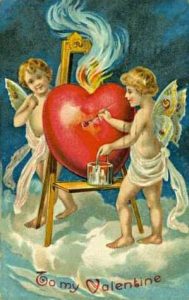 The attempted suppression of Christianity by the Romans has a great deal to answer for. St Valentinus – or one of the others as there were quite a few other saints called ‘Valentine’ – became a symbol, not just of love between a man and a woman but of any extraordinary bond existing between two people. Obviously, those fighting the horrible Romans had a lot in common and often the hotbeds of this resistance were Christian monks, although technically they were banned. On St Valentine’s Day people would become ‘spiritual and lifelong partners’. Two in the 7th century were St Sergius and St Bacchus, who underwent a ceremony linking themselves together in life and death. The latter was not long in coming as they spoke up against the Romans and refused to give up Christianity in favour of the Roman gods. They were tortured and St Sergius forced to watch the beheading of his life partner, a fate that awaited him minutes later. According to the lurid legend, his execution was delayed just long enough to allow him to fully understand and witness what had been done to St Bacchus. Believe it or not, as you will….. 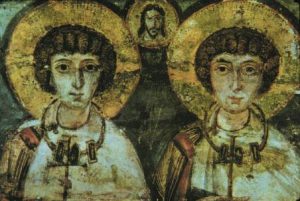 Geoffrey Chaucer embroidered the legend in his Canterbury Tales in the 14th century when he wrote of courtly love and the goings-on in the king’s household. In the 18th century people began to give each other flowers, sweets and ‘keys’ as a symbol of unlocking the heart.

Some poems and reflections on love

Whatever you believe, have a wonderful Valentine’s Day! Here are a few poems and reflections on love.

She Walk in Beauty by Lord Byron

Of cloudless climes and starry skies;

And all that’s best of dark and bright

Meet in her aspect and her eyes:

Thus mellow’d to that tender light

Which heaven to gaudy day denies.

Lord Byron wrote this in 1813 about his cousin, Lady Wilmot Horton, whom he met at a Ball. She was dressed in mourning, hence the phrase ‘like the night’. She seems, in the poem, unobtainable as she belongs to the heavens. 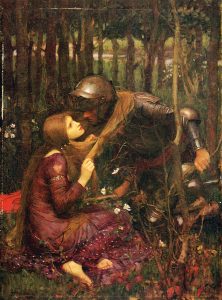 I have been a walk this morning with a book in my hand, but as usual I have been occupied with nothing but you: I wish I could say in an agreeable manner. I am tormented day and night. They talk of my going to Italy. ‘Tis certain I shall never recover if I am to be so long separate from you: yet with all this devotion to you I cannot persuade myself into any confidence of you. Past experience connected with the fact of my long separation from you gives me agonies which are scarcely to be talked of

This is one of many passionate letters by John Keats to Fanny Brawne. By this time – May 1820 – he was showing signs of the tuberculosis which was to kill him on February 23 1821, aged just 25. Despite his very short life, and not being recognized except by a few ‘fans’ at the time of his death, he is now considered one of the greatest Romantic poets. Possibly his most famous line is ‘Beauty is truth, truth beauty – that is all ye know on earth and all ye need to know’. (Ode on a Grecian Urn).

As fair art thou, my bonnie lass,
So deep in luve am I;
And I will luve thee still, my dear,
Till a’ the seas gang dry:

Till a’ the seas gang dry, my dear,
And the rocks melt wi’ the sun;
I will luve thee still, my dear,
While the sands o’ life shall run.

This poem was written in 1794 in the period when Robert Burns was working on preserving the Scottish Language, especially from the perfidious English tongue. He is probably most famous for Auld Lang Syne.

How do I love thee? Let me count the ways by Elizabeth Barrett Browning

The poet at first declined to publish this poem as being too personal. However, her husband persuaded her to do so, pretending that it was a translation of a foreign poem. Hence it was published as part of a book, ‘Poems from the Portuguese’. It has probably come to define her work, some considering it on a par with Shakespeare. 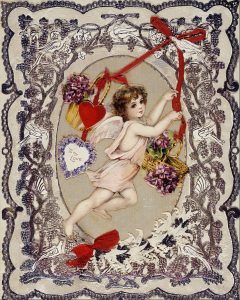 Shall I compare thee to a summer’s day?
Thou art more lovely and more temperate:
Rough winds do shake the darling buds of May,
And summer’s lease hath all too short a date:
Sometime too hot the eye of heaven shines,
And often is his gold complexion dimm’d;
And every fair from fair sometime declines,
By chance, or nature’s changing course, untrimm’d;
But thy eternal summer shall not fade
Nor lose possession of that fair thou ow’st;
Nor shall Death brag thou wander’st in his shade,
When in eternal lines to time thou grow’st;
So long as men can breathe or eyes can see,
So long lives this, and this gives life to thee.

William Shakespeare wrote this, quite probably to a man referred to by scholars as ‘The Fair Youth’. One of several candidates for this title is Henry, Earl of Southampton. Shakespeare is quite besotted. As can be read above, he hopes that this poem will be a form of immortality for him. In other sonnets, he encourages this fabulous being to marry and have children in order to perpetuate his beauty. Was the relationship purely platonic? Of course, say some scholars, as Shakespeare was seeing and writing things that were beyond the ability of lesser mortals and he should not be judged by conventional standards. Others are not so sure, one reason being the quantity of sonnets to this particular person – no less than 126.

The sun’s gone dim, and

For I loved him, and

He didn’t love back.

Many know Dorothy Parker for he wisecracks. She said ‘Men rarely make passes at girls who wear glasses’. She also quipped ‘Money cannot buy health, but I’d settle for a diamond-studded wheelchair’. One of my favourites little poems is about love:

‘By the time you swear you’re his,

Shivering and sighing,
And he vows his passion is
Infinite, undying –
Lady, make a note of this:
One of you is lying’.

Being an aspiring writer, though, I recommend this to all my clan:

‘If you have any young friends who aspire to become writers, the second greatest favor you can do them is to present them with copies of The Elements of Style. The first greatest, of course, is to shoot them now, while they’re happy’.

Symptoms of Love by Robert Graves

Love is universal migraine,
A bright stain on the vision
Blotting out reason.

Are omens and nightmares –
Listening for a knock,
Waiting for a sign:

For a touch of her fingers
In a darkened room,
For a searching look.

Take courage, lover!
Could you endure such pain
At any hand but hers?

Robert Graves, an English poet, died in 1985, aged 90. He had written over 140 works, possibly the most famous being I, Claudius, a ground-breaking international BBC production, starring the famous actor and son of Norfolk, John Hurt.

If you are not too long, I will wait for you all my life.

But, let’s end with this, which is refreshing for not being flippant:

Keep love in your heart. A life without it is like a sunless garden when the flowers are dead.